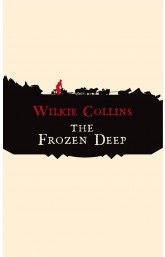 In a nutshell: Frank Aldersley and Richard Wardour are in love with the same woman, Clara Burnham. Clara’s heart belongs to Frank, but Richard is convinced that Clara belongs to him. Through Clara’s ‘gift’ of second-sight, she foresees a horrible event that will take place between these men who, at first, are unaware of their connection to each other. They both prepare to leave on separate ships for an expedition to the Arctic. One of the men will die in his effort to proclaim his love for Clara.

What intrigued me the most about Collins’ novella is the tinge of supernatural surprise through Clara Burnham’s second-sight, which is also referred to as the “Scottish second-sight.” According to an article published in The Scotsman on Thursday, February 23rd, 2006, “A Second Sight for Sore Eyes,”  the unnamed writer states that “Many experiences of second sight predict death.” In Collins’ novella, Clara suffers a fainting spell and once revived does not sleep during the night. Mrs. Crayford, wife of the ship lieutenant, asks her what this means, but Clara is frantic in questioning Mrs. Crayford only to reveal her what disturbs her:

‘Have you seen or heard anything of Richard Wardour?’

‘What an extraordinary question!’

‘Answer my question! Don’t trifle with me!’

‘Compose yourself, Clara. I have neither seen nor heard anything of Richard Wardour. Take my word for it, he is far enough away by this time.’

‘No! He is here! He is near us! All night long the presentiment has pursued me – Frank and Richard Wardour will meet.’ (24)

Later in the novel, Clara’s prediction of one man’s death comes to fruition, but you’ll have to read the text to find out who!

Interesting TidBit: According to the “Note On the Text,” Wilkie Collins (1824-1889) originally wrote The Frozen Deep as a play that was “revised and cast” by Charles Dickens (103). Dickens and Collins portrayed the lead male roles. Years later, Collins turned the play into a novella and it was serialized in The Temple Bar (103).